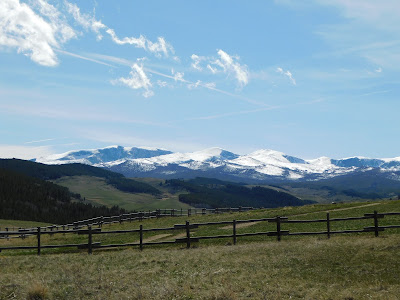 Summer is right around the corner, and I am ready for it! Getting away into the mountains is my favorite part of summer. Up in the crisp fresh air, no phone service, and endless adventures. It is also where I like to go to rejuvenate and relax. Taking time to recharge is something all of us need to do from time to time.

Spending months slaving away in front of the computer to finish and publish a book can be exhausting. But working hard doing something I love is rewarding and thrilling. Seeing that hard work getting recognition is the best feeling. But taking a break and having time for yourself is a must. Life gets busy and finding time for yourself can be hard. For me, time in the mountains is just what I need for a life reset. 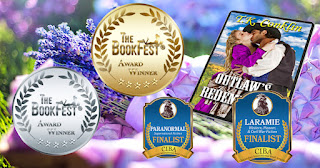 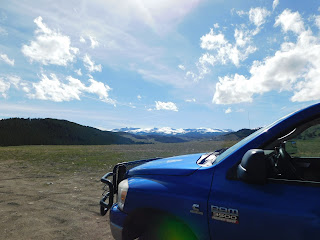 Living at the base of the Big Horn Mountains gives me endless opportunities to go up and play or relax. Just a day drive over the mountain to Tensleep and back is relaxing and wonderful. After getting through Wyoming's unpredictable winter and going through the moody spring weather, I'm ready for summer and time in the mountains. 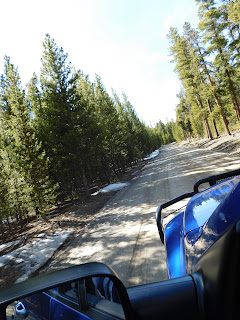 Those lucky times when I get to see the local wildlife
is always a giant bonus. 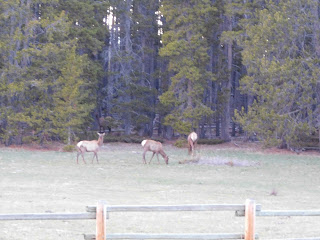 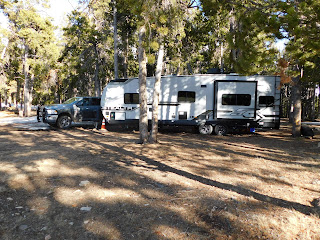 We have upgraded to Glamping!  Growing up, we loved to sleep outside under the stars. Summertime in a ranch house with no air conditioning, it gets hot. We spent most of the summer sleeping outside on ancient bedsprings. Then we upgraded to tents! Hunting camp with dad's big canvas tent was always so much fun. Warm and snug inside with the stove on a cold mountain day. Now I've become what I used to make fun of, a camper trailer camper. Going from a leaky 1977 camper to a new 2021 camper is so nice. Comfort but we still get to be out with nature enjoying the mountains.

Though I still make time to write while I'm relaxing in front of the campfire or sitting on top of the mountain with an amazing view before me. I always take a notebook and a handful of pens with me when I go to the mountains to hide from the hectic world. 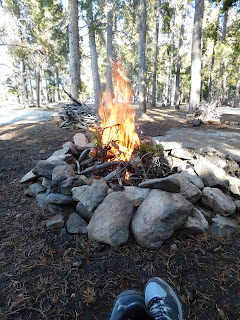 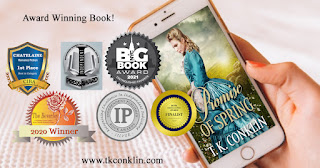 In Promise of Spring True Tucker gets lost in the mountains. After saving the life of a little girl, a blizzard strands True in a cabin with the girl and her handsome father. Adventure, excitement, and love find True as she spends time in the mountains with the dashing man and his adorable daughter. But when it's time for her to return to her normal life, will she stay with the man she loves or choose the life she is accustomed to?

Outlaw's Redemption is a winner! 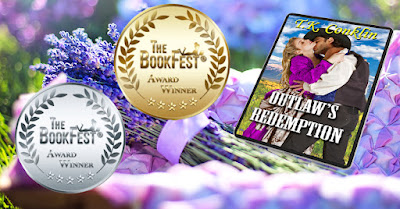 I entered Outlaw's Redemption in The Book Fest Awards a while back and WON!  What a happy surprise for me last night. I received an e-mail about the winners and was honored to be among such great authors.

But winning First Place in Paranormal.... this might confuse people. 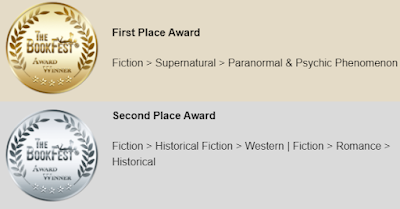 When Outlaw's Redemption made the Finals for the Chanticleer Reviews Paranormal Category, many people were confused. "But your books are Western Romance" some people said to me. This is true. Western Romance is the main focus of my books and many people don't think that Historical Western and Paranormal should go together.  Not all my books are this way, but a few have paranormal elements.
Outlaw's Redemption is a good mix. Leslie has visions of events to come. Boone is haunted by a ghost that speaks to him in his mind. That is just a quick example. There is so much more to it. The love blossoming between them, his promise to fulfill, her secret ability, and a cast of complex characters.
I never thought of my books as Paranormal. To me, paranormal was vampires, witches, werewolves, etc. For those who have read my books know that the Tucker sisters each have a special ability. Joanna can see at night. Shyfawn heals with her hands. True has visions of events to come. The abilities pass only to their daughters as their families grow.
I never saw those abilities as being paranormal but apparently they are. After that, I decided to enter Outlaw's Redemption into the various Paranormal categories in contests. I'm very glad I chose to branch out.
However, not everyone likes this combination of Historical Romance and Paranormal. People have their own preferences, and that is okay. I myself enjoy this combination. Many years ago, I read a historical western romance that had merged the two. I can't remember who the author was or what the book was called, but I really enjoyed it. Her main character could heal with her hands. Another book I read, her main character could touch an object and see past events. There were a handful of theses book I read before I began writing and I loved it. So I decided when I started writing my books, my main characters would have their own special abilities.
As the years went by, the families grew and their daughters gained the abilities. So three generations later, the abilities are still being passed on. (I have so many books to publish) Future books have a few surprises in them. I can't give up too much information, but there will be a few books with new characters and new abilities.
The next few books I publish won't have the paranormal aspects in them. I love writing both and will continue to do what I love. My lifelong dream of being an author is finally coming true. 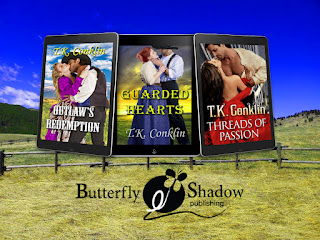 Signed books are available at Butterfly Shadow Publishing.
Free Shipping!
Order one of all of my books signed and personalized for you. Plus, free bookmarks and a small gift included. And did I mention FREE SHIPPING!
at March 31, 2022 No comments:

I will be doing a book signing in Newcastle Wednesday March 23rd at the Weston County Library from 10-2. Stop in and see me. Grab a book or bring your book in and I'll sign it. 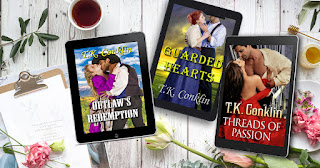 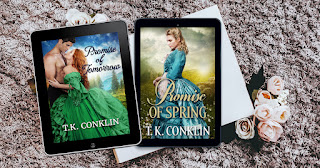 Happy to announce that Outlaw's Redemption made the finals in the Chanticleer International Book Awards for Paranormal Romance. 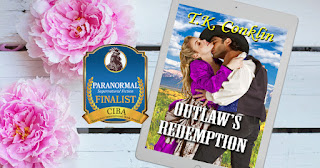 First place winners will be announced in June. There are so many talented people on this list and it's such an honor to be among them. Check out the list, you may find your next favorite author on there.

Not many people care for paranormal aspects in western romance, but many, many, years ago I read a couple that added the paranormal. I loved it! Not vampires, werewolf, or fairies. But woman with elemental abilities and physic powers.

When I started writing the Rimrock books, I gave all of the Tucker sisters their own special gift. A gift that passes on to their daughters. Some gifts don't pass on the same, some with dire consequences. As in LaRisa's case. Her story is told in Guarded Hearts. 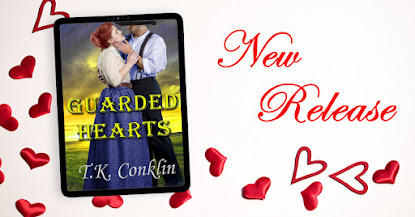 Hello all, I hope everyone is having a fantastic February. We all know that February is best known for romance, and who can resist a good romance story. I never could. Though I loved reading, I had a desire to write my own love stories. So eventually I did.
First, I needed a setting. Second, great characters. I randomly chose a name for the town, (I was around sixteen at the time) and it stuck. Rimrock is a fictional town set in the wilds of Wyoming and the people there all have a story to tell.
After discovering romance books and falling in love with them, I wanted to start writing my own books. It started when I was a junior in high school with the idea for one book. Then three books. Then five books. Over the years, I fell in love with my characters and the supporting characters and decided that their stories needed to be told as well. There were three main families in the town that kept growing and growing. Soon I was writing books about their children and grandchildren.
Rimrock itself started with a few settlers but over the years grew into a bustling town and a stop for the railroad. The train brought more interesting characters to the town, and they had their own story to tell. Each book is a standalone, but they have reoccurring characters. 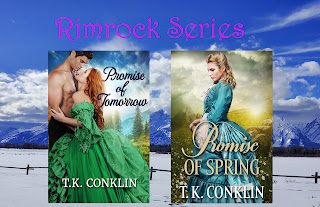 The first two Rimrock books are finished and I'm excited to get more finished. This series is about the original settlers of Rimrock. Full of romance, fighting to survive on the harsh land, defending loved ones against danger, mystery, and even a little magic. 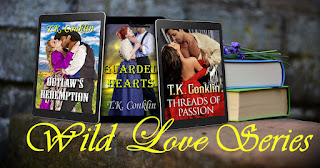 The Wild Love Series is about the second generation of the Rimrock families. The first three books are finished, and I can't wait to get the rest finished.
Connect with T.K. Conklin
Facebook
Twitter
Instagram
BookBub
Amazon
at February 22, 2022 No comments:

I hope the day is full of happiness and romance for the couples out there. For those singles out there I hope your day is wonderful.  Spending the majority of my adult life single, Valentine's Day was just another day. I could have cared less. I was happy and content with my life and myself. But for the past two Valentine's Day's I've been lucky enough to spend it with a great guy. The right one comes along at the right time. 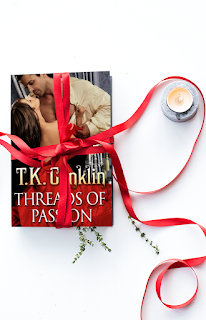 Summer is right around the corner, and I am ready for it! Getting away into the mountains is my favorite part of summer. Up in the crisp... 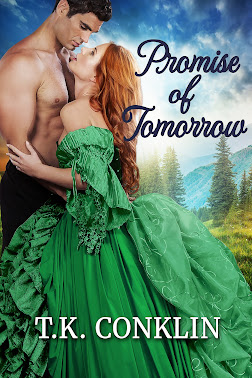 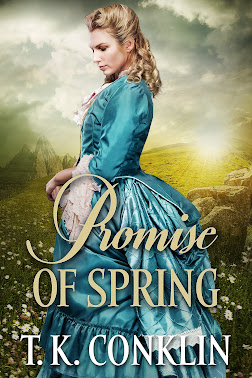 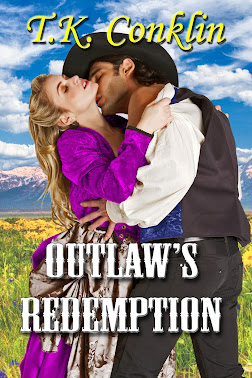 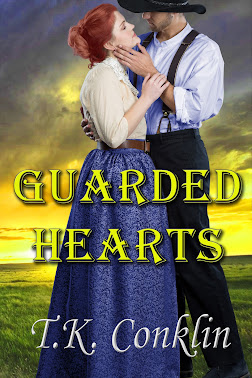 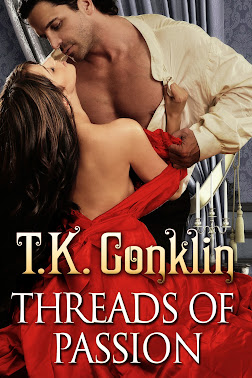